WHEN YOU BUY TWO OR MORE 30 DAY PACKETS YOU'LL SAVE UP TO $50 PER PACKET COMPARED TO NATIONALLY ADVERTISED  RELIEF FACTOR WITH THE EXACT SAME INGREDIENTS!

RELIEF Works By Combining a Blend of the Highest Quality Antioxidants, Flavonoids and Norwegian Cold Water Fish Oil. When Used Together, They Form a Network of Antioxidant Compounds Which Clinical Research Shows May Be Beneficial in Relieving and Preventing Joint and Muscle Pain Associated with Aging. 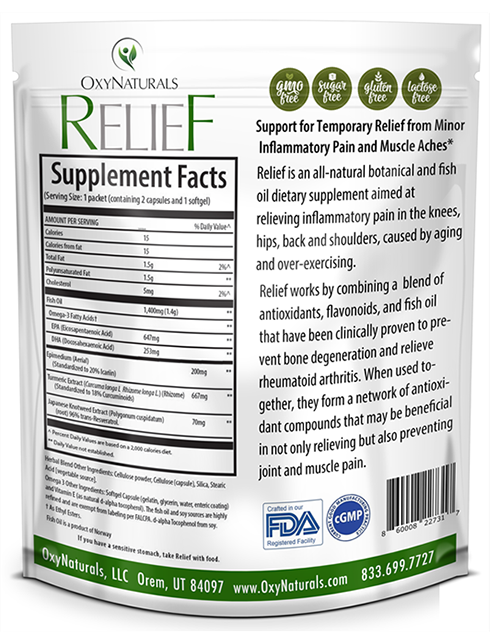 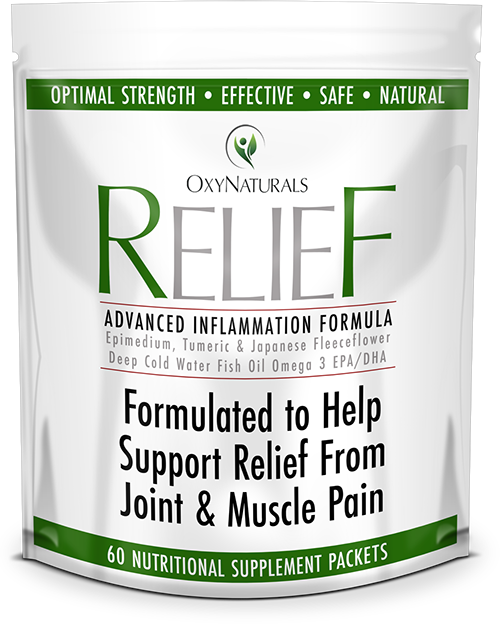 Experience First Hand What It Can Do For You! 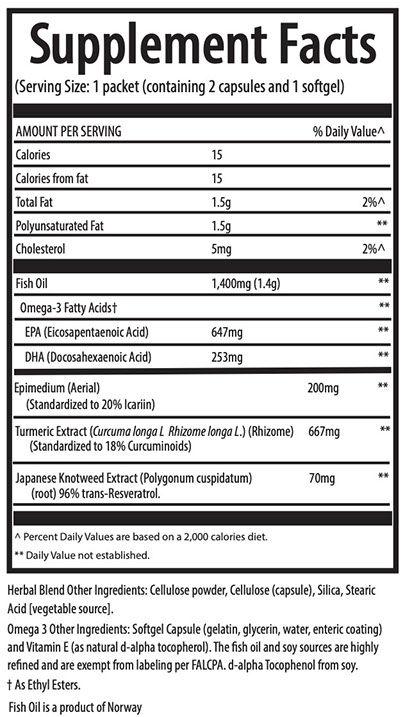 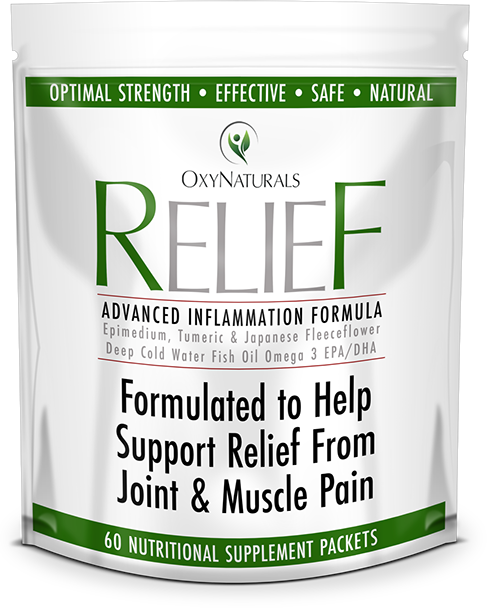 Omega-3s, fatty acids found in flax seeds and several kinds of seafood, have been shown to relieve symptoms of rheumatoid arthritis and many other conditions. Omega-3s have been shown to reduce morning stiffness and relieve tender and swollen joints. The two Omega-3s that are grabbing everyone's attention are EPA and DHA. Both of them can be found in seafood. EPA and DHA are long-chain omega-3s because of their molecular structure.

Omega-3 may help reduce inflammation. Both EPA and DHA have also been proven to help reduce the swelling and pain caused by inflammation. One study found that fatty acids reduced morning stiffness and tender and swollen joints caused by rheumatoid arthritis. In the same study, participants could also reduce their pain medication intake.

The fats found in omega-3 are considered healthy and help keep joints healthy by rejuvenating joint tissues and providing these joints with appropriate lubrication.

OxyNaturals RELIEF derives the Omega-3 in its product from deep, cold water (Norway) wild-caught fish oils that have been molecularly distilled to remove impurities, including mercury and other heavy metals.

Epimedium is a flowering plant native to Asia that contains the flavonoid icariin, a safe natural anti-inflammatory drug that prevents cartilage and bone degradation in patients with rheumatoid arthritis. Icariin is believed to help with osteoporosis. For instance, taking an extract of the epimedium plant for about two years with calcium supplements decreases bone density loss.

This ingredient has additional benefits that reduce cartilage degradation in people who have osteoarthritis. Icariin won't undo the damage that has already been done, but it is going to slow it down and give people the mobility they need. In addition, Icariin is meant to maintain the best circumstances for the production of nitric oxide that supports blood flow and encourages tissue health.

Turmeric is derived from the root of a plant in the ginger family from Southeast Asia and is a component of curries in cuisines across the region. Turmeric contains the chemical curcumin. This chemical is what is believed to help against inflammation. A lot of people use turmeric to treat osteoarthritis. Turmeric, taken as an extract in combination with other herbs, reduces pain caused by this condition as well as improves the general function of the afflicted area.

Japanese Fleeceflower is an herbaceous perennial plant native to East Asia that has been used in traditional Chinese and Japanese medicine for its painkilling properties. The main proponent of these properties is its concentration of resveratrol, which is also found in grapes, blueberries, raspberries, peanuts, mulberries, and red wine.

As resveratrol is an antioxidant, it helps in protecting cells in our bodies from deteriorating. Cell damage can be caused by free radicals, which can lead to cancer, aging diseases, and brain damage. Free radicals are unstable oxygen atoms that are created by pollution, sunlight, and our body's natural metabolic processes.

Every year over 15 million people in the United States suffer from intense joint pain that significantly affects mobility, flexibility, and overall quality of life. Anything from exercising to simplest tasks like opening a bottle can trigger excruciating pain. 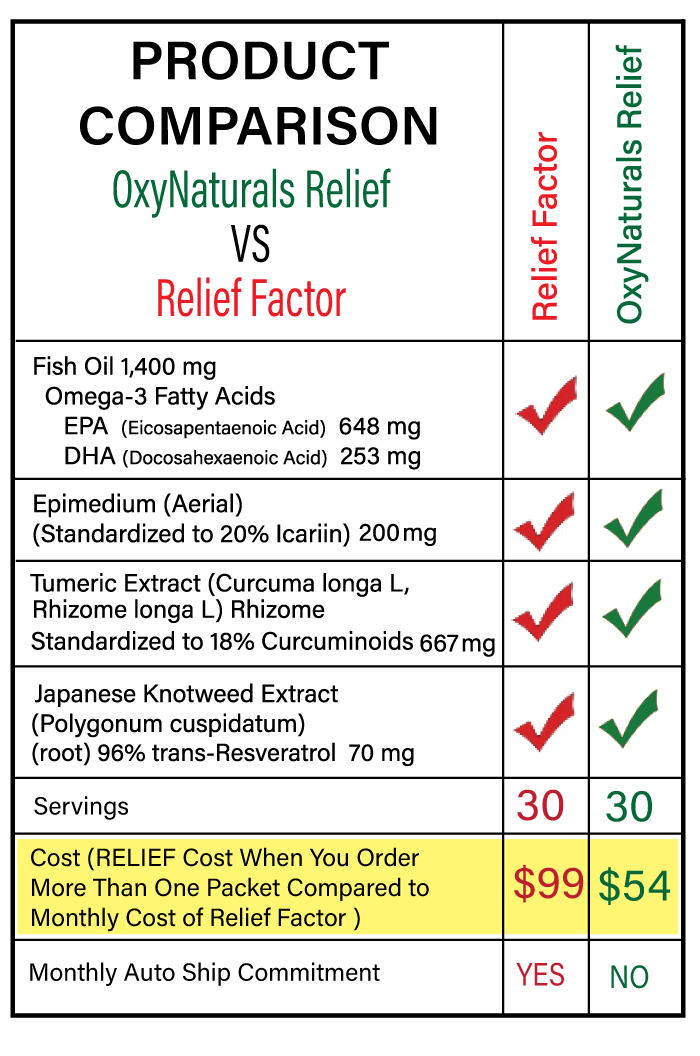 Senior-aged people with chronic pain are desperate to find the next life-changing joint supplement to give them a taste of the joint pain relief they so desperately seek. Relief Factor is one of the latest in joint pain relief supplements. You've probably heard about Relief Factor many times a day on the radio and seen their television ads. We estimate they spend up to $1 million weekly in saturation advertising. Based on research and customer testimonials, the combined ingredients are effective in helping to relieve pain in many people..

The drawback to Relief Factor is the overly high price and commitment you have to continue receiving the product. When you pay for Relief Factor (nearly $100 for a month's supply), you're helping to subsidize their $1 million a week advertising budget -- to the tune of about $50 per product.

In addition, when you order your two-week sampler for $19.95, after 2 weeks you'll be automatically charged an additional $99.95 for another 60-day supply. To the surprise of many, they'll ship it and hit their credit card with the $99.95 charge. You consent to be charged just by ordering and perhaps not reading the small conditions-of-sale type.

In other words, you will be charged automatically in regular periods by subscribing to Relief Factor's plan. This will be an ongoing subscription. And it is something most customers complain about when talking about Relief Factor because when many customers learn about this surprise commitment, many have to go through hoops (based on customer Internet feedback) to cancel their "surprise" subscription.

On the other hand, OxyNaturals' RELIEF contains the same ingredients as Relief Factor but at almost half the price when you order more than a one month supply. In addition, we offer FREE Shipping on multi-pads and no monthly commitment or surprise charges.

In conclusion, with OxyNaturals' RELIEF, you don't have to pay Relief Factor an additional $50+ IN ADDITION TO SHIPPING to subsidize their estimated $1 million a week daily saturation advertising. And, when you order OxyNaturals' RELIEF multi-paks, you save even more, including FREE USPS PRIORITY SHIPPING.

We work hard to formulate the most advanced products on the market. Our 60-Day Customer Satisfaction Guarantee is designed to give you ample opportunity to experience optimal results from OXYNATURALS RELIEF, completely RISK-FREE.

Each Relief pouch contains 60 pill packets or 30 daily doses (two packets per day). If you're new to RELIEF and want to see if it works for you, you can use three 30-day pouches  RISK-FREE for 60-days (Activation Phase (3 packets per day) & Maintenance Phase (2 packets per day).  If you're not 100% satisfied, call us for a refund and dispose of the empty bottles—no need to go through the inconvenience of returning the empty containers.

IMPORTANT: WHY YOU  NEED TO ORDER AT LEAST 3 POUCHES

It may take up to 10 days for RELIEF, at three pill packets per day, to help relieve joint and muscle pain.

After that, only one two pill packets of RELIEF per day is required to maintain (Maintenance Phase) your pain improvement. Nevertheless, depending on your unique needs, you have three purchasing options from which to choose. Remember our 60-Day, Three Pouch No-Risk Money-Back GUARANTEE. 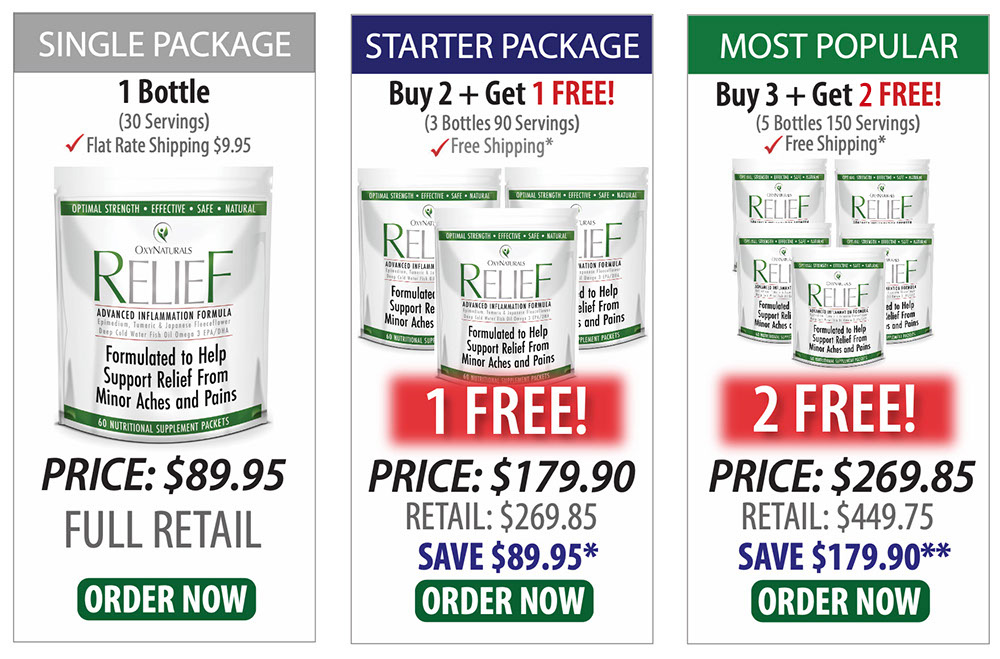 * Save $159 Compared to Relief Factor

** Save  $260 Compared to Relief Factor
All Prices Are in USD. Free Shipping Applies to Orders Shipped Within the US.

We Don't Believe in Auto Shipping Without Your Knowledge & Consent.

You're Charged Only Once for This One Order.

NOTE: The name that will appear on your credit or debit card statement for this transaction is "OxyNaturals"

†These statement have not been evaluated by the FDA. These products are not intended to diagnose, treat, cure, or prevent any disease.